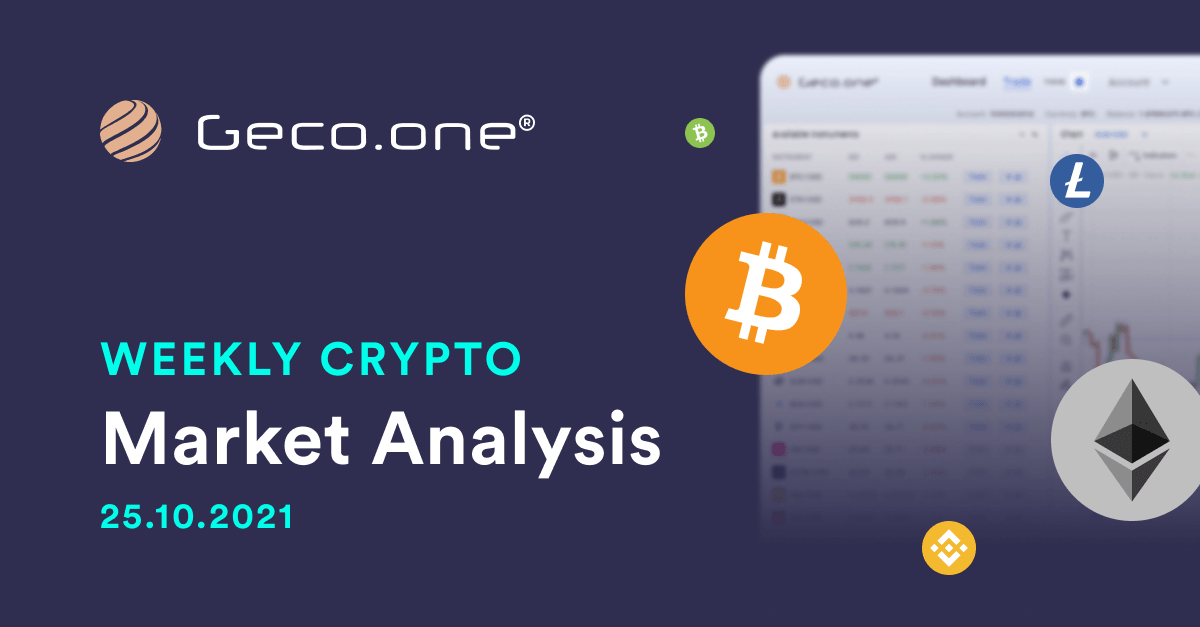 The BTC price increased between the 29th of September and the 20th of October this year by over $ 26k. It means that in just 22 days, bitcoin went up by more than 64 per cent. Such a significant appreciation led to overcoming several critical resistance zones and breaking a new all-time record (ATH) above $ 67,000.

However, looking at the quotations of the oldest virtual currencies, we notice that Bitcoin did not stay at a record high level for too long. It quickly returned to the area of ​​the previously defeated resistance (now support) in the amount of $ 60,000. There, however, a slight demand reaction appeared last weekend. At the beginning of the new week, we also observed an increase, and if this trend continues, the BTC price could soon cross the 67,000 USD barrier again.

The current situation on the Ethereum quotations, which increased between the 29th of September this year, is also exciting. On the 21st of October this year by almost $ 1,600, which was over 57 per cent. This appreciation led to the breakdown of several significant resistance zones of $ 3,160, $ 3,640 and $ 3,960 and only stopped around $ 4,200.

However, we cannot rule out that the consolidation observed for several days will turn out to be only a form of correction, after which Ethereum will return to the upward path.

We could also expect potential increases in litecoin quotations. The exchange rate of this cryptocurrency has returned as a result of declines lasting for several days to the area of ​​the recently defeated resistance (now support) in the amount of $ 190.

It is noteworthy that this support precisely coincides with the golden ratio, i.e. measuring 61.8% Fibonacci correction from the earlier upward movement and crossing the line of the local upward trend, which may naturally determine the appearance of demand response in its vicinity.

Looking at the XRP quotations, we can see that after an increase of almost 39%, which we observed between the 29th of September this year and on the 10th of October this year, the price of this cryptocurrency is moving in a horizontal trend. The upper bound of this pattern is a resistance of $ 1.16. The lower is the most recently broken resistance (now support) in the region of $ 1.05 and measures 50% Fibonacci corrections from the earlier upward impulse.

Given that consolidations tend to be corrective patterns, statistically, the market is more likely to try to break out. If that happened, the XRP rate could then rise to around $ 1.39, or even $ 1.66.

The current situation on the XLM quotes is also quite similar, the rate of which has returned to the area of ​​the recently defeated resistance (now support) in the amount of $ 0.36. Taking into account that this level precisely coincides with the golden ratio, i.e. measuring 61.8 per cent. Fibonacci correction from the earlier upward impulse seems highly probable that there will be a more significant demand response in its vicinity. Permanent rejection of this zone could, in turn, initiate another growth impulse, for which agricultural ranges seem to be around $ 0.44, or even $ 0.50, $ 0.5750, or even $ 0.74.